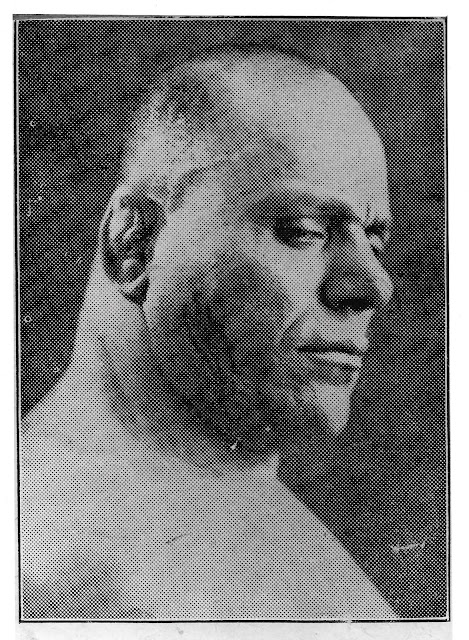 If you have more detail to add to Charlie's history please contact me at thefrenchangeldeathmask@gmail.com.


Charles Manoogian was born in Karpert, Armenia February 2nd,1895.  He was a professional wrestler in the 1920's through 1940's. He wrestles as Karloff / Charles / Charlie / Charley Manoogian and competes all over the world being touted as the Armenian champion.

Thanks to wrestling historian Phil Lions, he isolated the name Karloff Manoogian within the following video. Coincidentally this in this only known video of Karl Pojello. This match between Karl and Karloff took place in Italy 1939. Karloff is picture left. 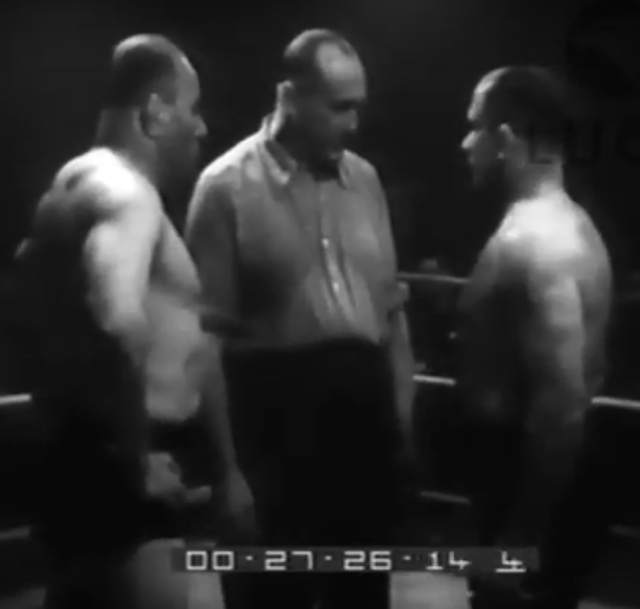 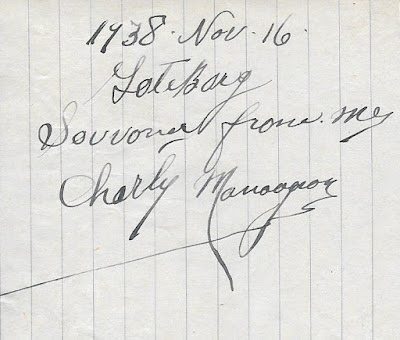 Note there appears a real possibility of a family connection to Bobby Managoff “Manoogian” & his father Armen (Robert) Manoogian, another Terrible Turk who wrestled previously. Although he Charlie went by Manoogian it appears that on occasion he was detailed as Manoognan.

Ali Adali was a family friend of the Kassabian family.  Dee Kassabian tells a story of having ridden back home in the care on Bobby Managoff's lap, where both Bobby & Ali had wrestling matches.  From Dee's book.


"My Four Fathers and Other Short Stories": 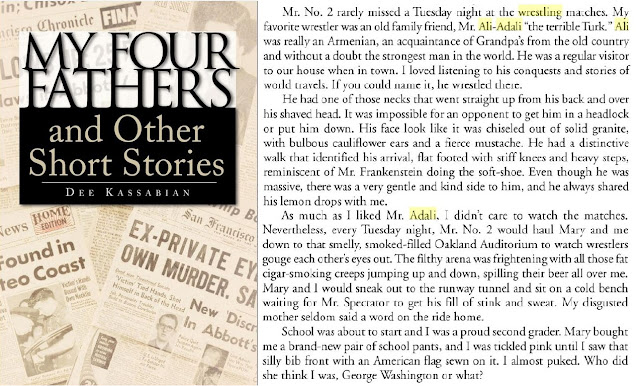 I bought the below poster singularly because it had the stamp of Karl Pojello’s Chicago promotion on the back, detailing “Karl Pojello Rm, 408, 206 North Wells Street, Chicago Illinois.” There is a companion poster to this one advertising all those persons Karl was promoting. At the time of initial research Ali's history was a mystery


All images are NOT Chalie Manoogian on the poster.

The person in the middle, decorated, is Frank Norkus. All the rest are Charlie 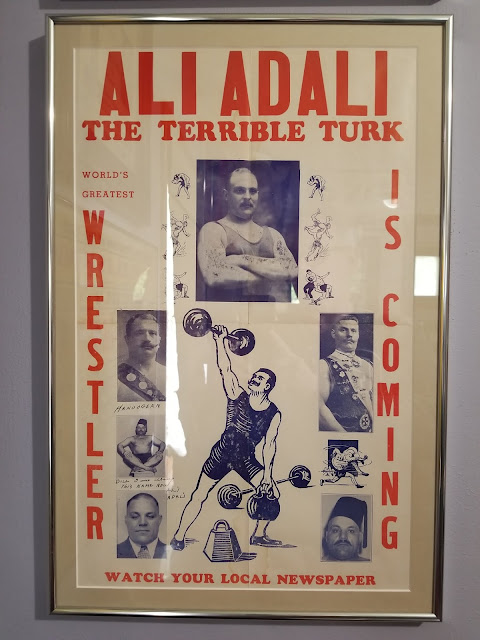 Handwritten on this poster is: “Manoogean” then “Bill, I am going by this name new Ali Adali”. Although the "Manoogean" on the poster was a clue, at the time, no connection to any known Manoogian could not be found. Worse, Karl got "cute" when creating this poster.

Wrestling historian Jimmy Wheeler put in a TON of time digging into all the Ali Adali wrestlers. He also dug into the possible connection to the name “Manoogean”.

As this was poster was created Karl Pojello’s promotion, we looked for connection to the Manoogian/Managoff family. Bobby Managoff/Manoogian created the life-castings, aka death-masks, of Maurice Tillet. Maurice was Karl’s main moneymaking wrestler and protégé.  Something we did not find until we reached Dee Kassabian.

Rather than finding a Manoogian family connection we fouund a “Manoognan” connection. There was a man named Karloff Manoognan, Armenian Champion, mentioned in the 1936 King’s Coronation Tournament in England. A tournament Karl Pojello took second place in.

There was also a Karloff Manoognan picture, detailed as a heavyweight wrestling champion, in a Chicago Newspaper. This picture looked so much like one of the Ali Adali pictures. 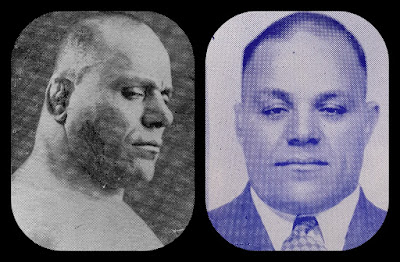 Karloff Manoogian was therefore considered to be a very good candidate to be the “Manoogean” hand-written on this Ali Adali poster.

After discussing with Jimmy Wheeler the possible connection, between Ali Adali & Karloff Manoogian, he isolated the following definitive proof/connection between the name Ali Adali and Charlie Manoogian. 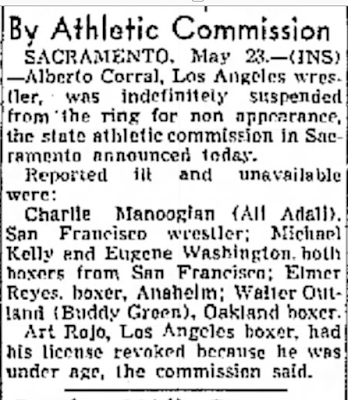 Although we “believed” Ali Adali was Charlie/Karloff Manoogian there was a little something hidden within the poster mentioned previously. That was Frank Norkus. 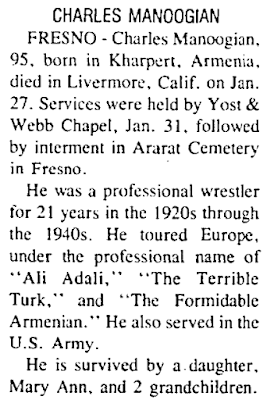 Before Jimmy isolated the following obituary of Charlie, we were sent off trying to solve the Mystery of how Ali Adali, could be Pranas aka Frank Norkus.  Frank is also on this poster.

From Karl Pojello aka Karolis Pozela’s home town of Steigviliai, Šiauliai County, Lithuania, is historian, Aleksas J. Pašuškevičius. He shared the below picture of another Lithuanian historian, with a very early picture of Karolis within it. My eye immediately caught site of the same picture from the Ali Adali poster. 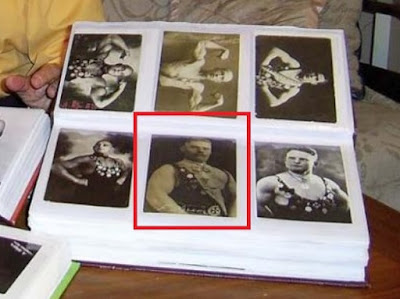 I reached out to Aleksas to ask if there was a way to get more information on this man and he immediately came back with some unexpected history. 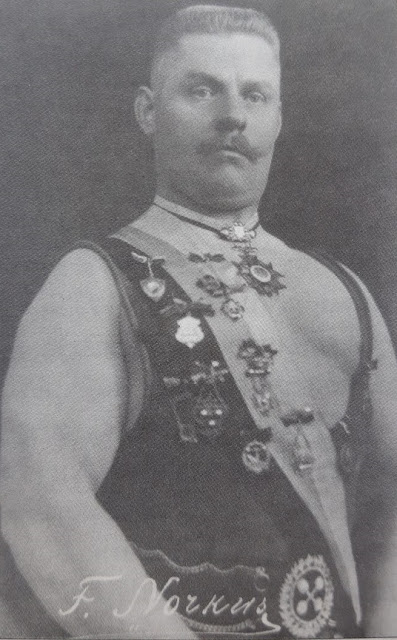 Same picture as the poster but notice the F. Norkus.

This man is Franas Norkus, aka Pranas Norkus. His history as a Lituanian strongman is well documented within the above mentioned book. Upon researching Franas, it was clear that when he arrived in the United States he universally went by Pranas Norkus within promotions & the Lithuanian community. He was mentioned prominently within a number of Lithuanian newspaper articles as Pranas Norkus.

At age 22 in 1899 he moves to Latvia. He settles in Riga competing & winning strength competitions and eventually becomes an athletics instructor there.

Norkus appeared in public as a powerhouse and a name in entertainment of the Lithuanian Social Society ‘zaislas’ organized in Riga in 1902, where he carried heavy weights and lifted a piano on his chest.

By 1912 he was being presented as a mighty champion, having performed in Estonia, Latvia, various Russian cities, as well as in Belgium, Switzerland, Germany, and even Persia. Competitions in the various countries, he won 15 gold medals, one of which was presented to him by the German Kaiser himself.

About P. Norkus in urase, “Norkus holds back 2 horses attached to his hand. He smashes a 4-inch stone with his naked fist. He lifts three men with one hand. Using a large military bayonet, he throws himself upon it but it does not pierce his hardened muscles. He lifts iron buckets weighing 300 pounds.”

He moves to the United States in 1913 and is known to the Lithuanian community as Pranas Norkus.

Norkus’s programs, posters, newspapers detailed in Riga: He will lift heavy objects, thrown on the neck the hardest iron card with people weighing 1,500 pounds, will lift upon his chest anvil with two people, with the bare hand will beat the nailed board a penny half an inch thick.

He remembers another important event when in 1912 the Lithuanian Catholic Society of Riga organized entertainment for the opening of the Lithuanian School, where Norkus was invited as the most important participant of that program. Before the program, he was greeted by several priests and, with great ceremonies, landed on the stage, where he was detailed as the “Drutuoliu Karaliu.”.

Just before coming to the U.S. he was noted for saying, “Only by living a healthy life, not drinking vodka and not smoking tobacco is such strength and health possible”.

While in the U.S. he performs feats of strength and works for Karl Pojello in pro-wrestling as Frank Norkus. The connection between Frank & Karl goes back as far as 1928. Frank is even is witness to Karl Pojello's naturalization request on October 2nd 1928.
I'm live in the United States and purchased the Ali Adali Poster, along with the following poster, from the same seller in Paris France.  Pay close attention to one particular image within this poster and you will see Frank, using one of the same images from the Ali Adali poster.  As we see Frank in this poster dated 1942 poster it is presumed that Frank was wrestling under an alias not currently known at this time. 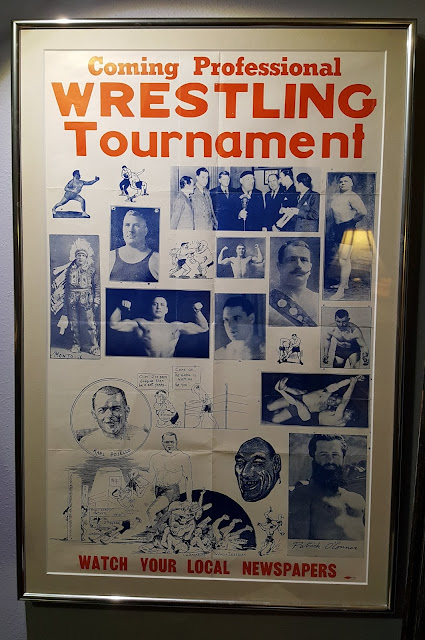 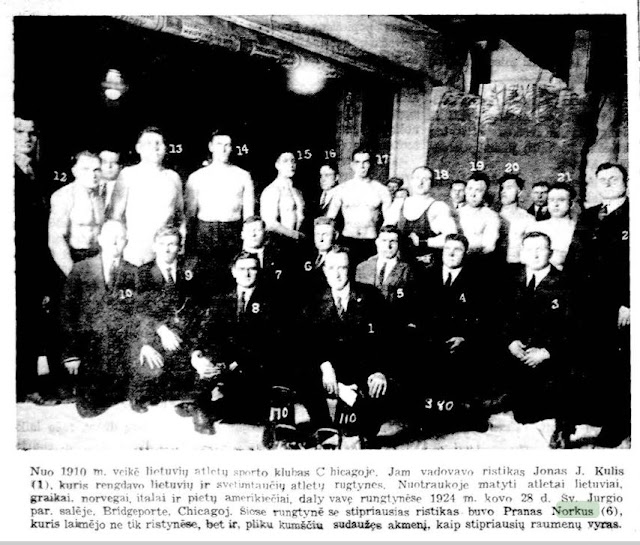 Upon Pranas's passing in 1960 in Chicago, he dies and is interred as “Frank”. His death record indicated that the informant is Johanna Norkus. Frank is detailed as having been a widower and retired wrestler.  His wife's name, according to his WW1 service registration card is Amelia. 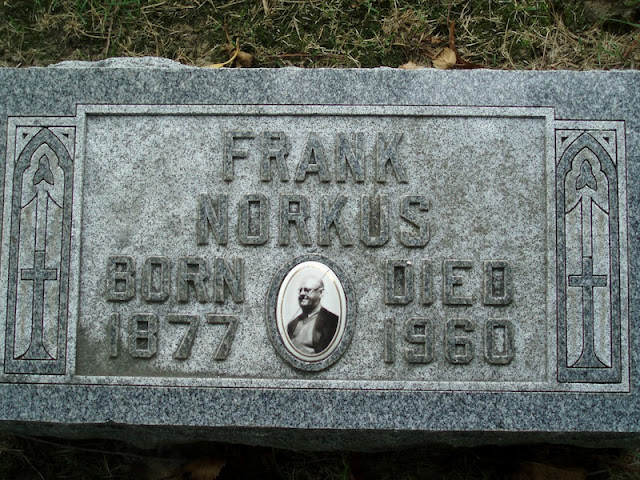 The following original articles are provided for historical detail.  To ANY of my Lithuanian friends, if there is more detail that can be added to his biography, that I have missed from the below, please reach out.  thefrenchangeldeathmask@gmail.com

https://www.google.com/url?sa=t&rct=j&q=&esrc=s&source=web&cd=18&ved=2ahUKEwidrJCKqZ3pAhVPVs0KHW81BLc4ChAWMAd6BAgIEAE&url=https%3A%2F%2Fepublications.vu.lt%2Fobject%2Felaba%3A24417254%2F24417254.pdf&usg=AOvVaw30M7kOE09IUyz3gTi6S-FW
LITHUANIAN INSTITUTE OF HISTORY VILNIUS UNIVERSITY
JUOSAPAS PAŠKAUSKAS
"LEISURE CULTURE IN THE LARGE CITIES AND PROVINCE OF LITHUANIA IN THE END OF THE 19TH CENTURY AND THE BEGINNING OF THE 20TH CENTURY"
Lithuanian strongmen did not achieve enormous international success. It seems that many of them traveled not to St. Petersburg, but to America, from where Lithuanian newspapers also received messages about their successful performances. We will discuss only a few posts here, as there is no more in-depth study of the birthplace, emigration causes, and fate of these powerhouses in America (almost always by changing their name). ……
….source's article about Samogitian mighty Pranas Norkas from Liepkalnis village (Telšiai county) draws attention to the fact that a strong man has never drunk and does not smoke, therefore all young people who want to be so strong must follow his example: he did all the work in the countryside and from a young age excelled in his strength. At the age of 22, he travels to Riga, where he is famous for his great strength. He raises 10 berkavas (Kažin? Ed.), Pulls rarities like threads, holds a couple of horses, and does other amazing work. / P. Norkus was characterized not only by strength, but also by great sobriety, because he almost never drank vodka or smoked tobacco. "Only by living a healthy life, not drinking vodka and not smoking tobacco is such strength and health possible," said Pranas Norkus, "and those words are very appropriate for our youth." It is unfortunate that in 1913 Pranas Norkus left for America. But, I believe that even there he will make Lithuania's name famous ...”
841 Liet. Aidas [aut. nenustatytas], Pranas Norkus, garsus lietuvių stipruolis, Šaltinis, 1914, rugpjūčio 4 (liepos 22), Nr. 31, p. 475.