Was Maurice Tillet “The French Angel”, inspiration for Shrek?


People love to say, look at how much Shrek looks like Maurice.  I was at the National Wrestling Hall of Fame Dan Gable Museum where one of the Maurice Tillet - French Angel Death Masks is located.  A lady, walked up to his death mask, completely unprovoked and said, "He sure looks like Shrek".  We talked and she had no idea that Shrek was almost certainly modeled and in part inspired from Maurice.  They may look every similar, however evidence that he did inspire Shrek goes beyond that than just physical appearance.  Please read on. 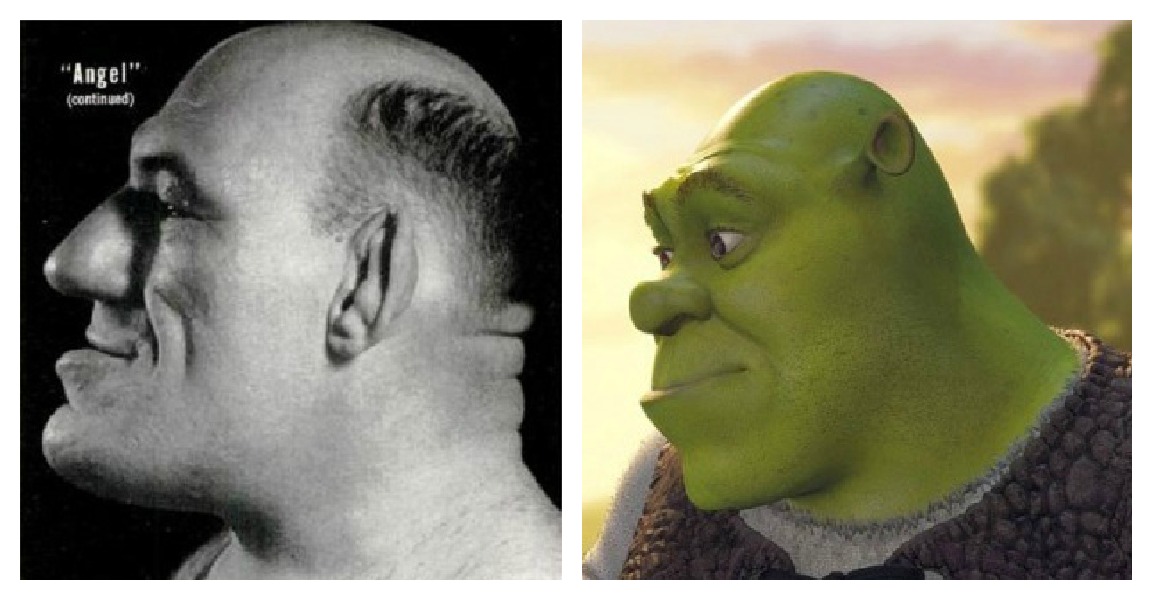 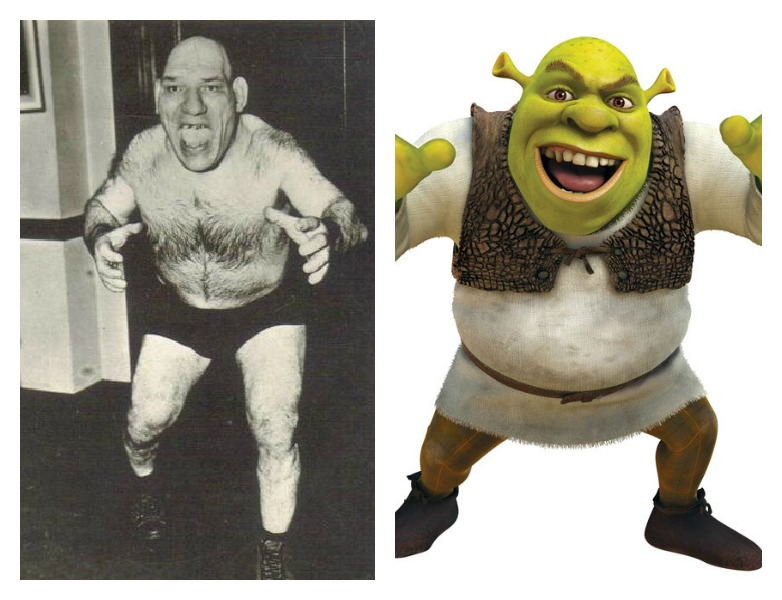 The below picture immediately made me think of Shrek. 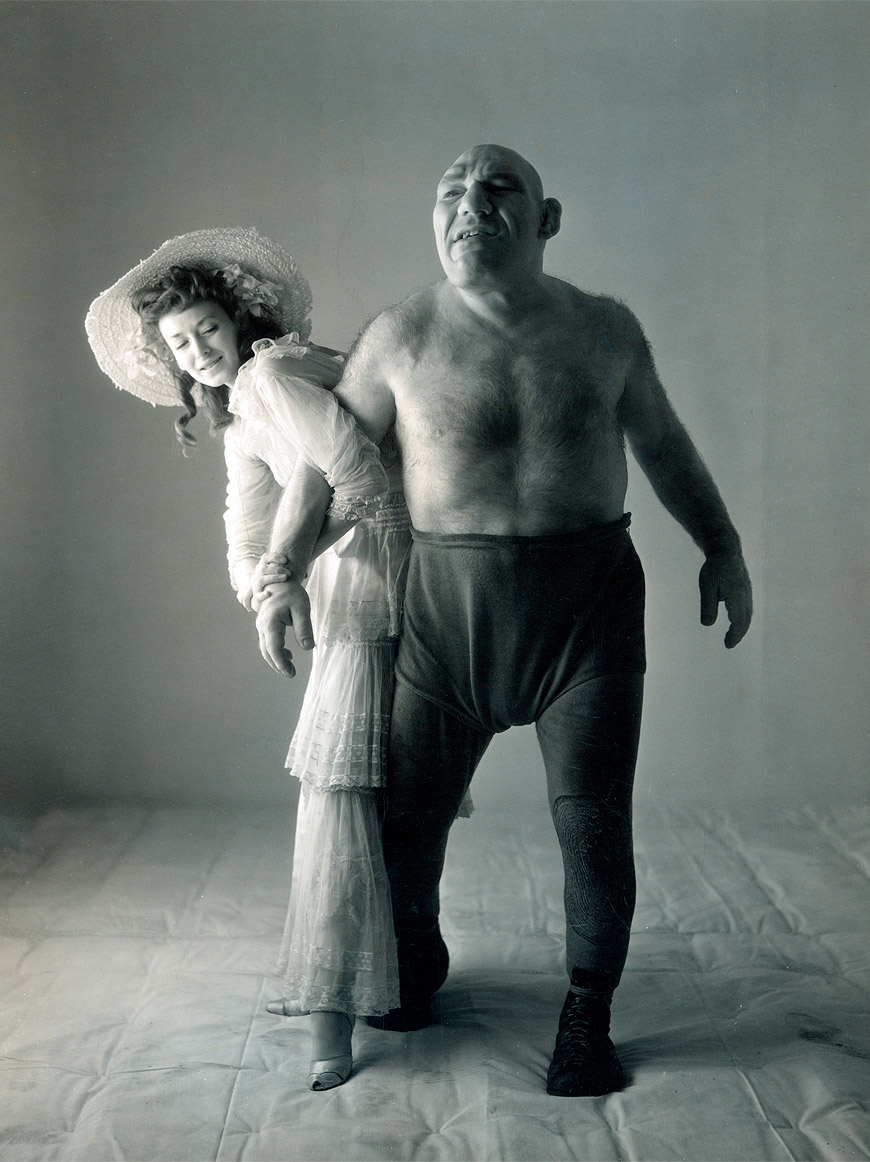 Dreamworks, at the time the original Shrek film was being developed, had only one movie ANTZ under its belt.

The Shrek film takes shots at Disney, as well as its CEO at that time, Michael Eisner.
DreamWorks was, in part, ran by ex-Disney executive, Jeffrey Katzenberg.  Here is the applicable section of Wikipedia on Jeffrey Katzenberg:
“When Eisner’s second in command, Frank Wells, died in a helicopter crash in 1994, Eisner refused to promote Katzenberg to the vacated position of president.(DISNEY)  This led to a falling out between the two executives, and Katzenberg left the company in September 1994. He launched a lawsuit against Disney to recover money he felt he was owed and settled out of court for an estimated $250 million. ….Later in 1994, Katzenberg co-founded DreamWorks SKG with Steven Spielberg and David Geffen, with Katzenberg taking primary responsibility for animation operations.”

Almost universally it is reported that animators saw the Death Mask of, Maurice Tillet, "The Angel" at York Barbell Museum, and it was there the inspiration for Shrek began.  At that time the only publicly viewable Maurice Tillet death mask / life cast, was at the York Barbell museum.  The other two known death masks were in private hands, and were not donated to museums until 2006.
Part of the creative research process at Dreamworks, included going to an actual swamp to do research on what Shrek’s swamp should look like.   Spending the time to go the York Barbell Museum to research Maurice is a reasonable expectation.   The question I believe needs answering is HOW were they led to Maurice.
I first had to consider the possibility the art directors / animators, created Shrek based on Chris Farley or later Mike Meyers.   Chris Farley was the original voice and inspiration for the character development of Shrek until he dies in 1997.   When Farley died, so did that version of the film.

You can hear a short bit of how Chris Farley sounded in a test here - http://www.thrillist.com/news/nation/hear-chris-farley-as-shrek-in-leaked-test-reel?utm_source=facebook&utm_medium=social&utm_campaign=thrillist

The entire movie was re-scripted, under Mike Meyers to distance itself from what it used to be with Chris.
I found some early art of the original Shrek.   The Left is William Steig’s original book art, the Sketch in the center is from Mike Ploog, and the right is Barry Jackson.  Mike and Barry were both involved in the creation of Shrek for the movie.  It sure looks to me as if this was William Steig’s Shrek, refined to fit Chris Farley.  I can see Chris Farley in the Shrek on the far right.  If you look at this Shrek you can see the Sweet bumbling Shrek, longing to be accepted, that Farley was set to portray.  This is not the Shrek that was eventually animated.

This is almost certainly the Shrek of Chris Farley, and the Shrek that was abandoned and re-imagined to fit the new script and cast. For details on what the film used to be like and how it changed after Farley’s death, go here - http://jimhillmedia.com/editor_in_chief1/b/jim_hill/archive/2004/05/17/how-quot-shrek-quot-went-from-being-a-train-wreck-to-one-for-the-record-books.aspx  The applicable part of the above website you need to read, is this:
“Of course, now that Chris was gone, other changes would have to be made to this motion picture. First and foremost, the film's original Fiona -- "Saturday Night Live" vet Janeane Garafalo -- would have to be replaced. (Why for? Well, Janeane originally got this role in "Shrek" because it was thought that her somewhat abrasive, sarcastic comic persona would provide a perfect counterpoint to Chris Farley's sweet if somewhat dim take on Shrek. But -- with Chris dead & gone -- Garafalo's version of Fiona was now thought to be just too downbeat for the film. Which is why "Shrek's” producers eventually cut Janeane loose and then offered this role to a much sunnier performer, Cameron Diaz). And -- since Princess Fiona was now supposed to be sweet -- it only stood to reason that Shrek should become somewhat sour. Still funny, mind you. But a tougher sort of character. Someone who wasn't interested in doing anything noble -- like becoming a knight. But -- rather -- this new version of Shrek would be a sadder, older & wiser ogre. One that just wanted to be left alone. Who was comfortable with his home in the swamp and the solitary life that he lived there. Given that this was obviously a fundamental change in the way the film's title character would be portrayed to the movie's audience, it was clear to Dreamworks execs that they now needed a performer with considerable comedy chops if the studio was going to make this decidedly unlovable character lovable. Which was why the studio was thrilled when Mike Myers finally agreed to become Shrek's new voice. However, one of the conditions of Myers coming on board this motion picture is that Mike really didn't want to be seen as Chris Farley's replacement. So he asked that the script of this animated feature be completely reworked. So that there'd be little if any carry-over from the Chris Farley version of "Shrek" to the Mike Myers version of the film.”

The Process - selecting a look for Shrek:
http://www.oocities.org/vitruvianbr/pdi.html
"Modelers started building the digital characters by using data scanned from a sculpted maquette and imported into Alias| Wavefront's PowerAnimator and Maya or Avid's Softimage|3D, but this was only the beginning. Shrek's 3D model went through 50 revisions, .... Shrek's model lost weight to make him younger looking and easier to animate....."
http://sideshowbarker.blogspot.com/2007/11/freak-of-week-6-maurice-tillet-french.html “Anonymous said... I was working in the PDI/Dreamworks art dept. while Shrek was being developed. On my wall I had photos of wrestling oddballs 'The Swedish Angel','Irish Angel' and the 'French Angel'. They may have well inspired the modelers who sculpted Shrek.

http://hesterstudios.com/design_maquettes.html
In the below we see the selected, supposedly final maquette version originally on display at Dreamworks Animation Headquarters.  On the right we see the thinned out version they used to make Shrek easier to animate. 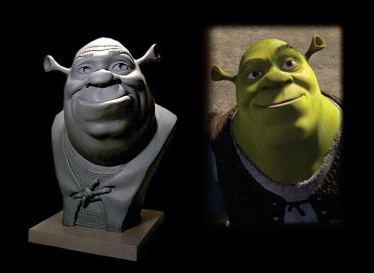 WHO sculpted the original Shrek Maquette's and from who's original drawings.  Only by talking to them will we ever prove for 100% certain Maurice was an inspiration.  If the above blogger is accurately representing his time at PDI/Dreamworks, then inspiration of Maurice for Shrek likely started in one persons cube.

There are other factors to take into account.  Watch Shrek roaring at Donkey, and Donkey just standing there smiling.   When Maurice entered the ring he roared at the crowd, and the crowd ate it up.  Maurice in REAL LIFE was known to be sensitive, kind, gentle, proud, and noble! I cannot help to think about how Maurice played at being a monster, but at the end of every act, he would crack that goofy smile of his that seems to mirror that of Shrek, and then no one bought the monster act of either.

When Shrek first steps into Lord Farquad's castle he has to battle those looking to be the champions to go after princess Fiona.  Shrek enters the area and then uses a nearby wrestling ring and starts throwing the challengers around in professional wrestling style.   Is this just a coincidence, or is this a nod to Shrek's origins as a wrestling Angel?

Shrek during the whole movie was working to be left alone back in his swamp, yet people were just drawn to him as their hero and champion.   This parallels Maurice's life as he tended to shy away from the public view as to not startle people.

I cannot help but to think of Shrek talking about the likelihood a woman like Fiona would have him.  Here is what Maurice had to say about women.
The Bakersfield Californian, Thursday July 17th 1941.  "Mr. Tillet, who hails from France and who wrestles for a living, is no fool. Long encounter with the world and its troubles have planted in his somewhat angular cranium the best idea for a happy life and he's in the market for it. He would like to marry…. He's a bit choosy about the girl, as she would be undoubtedly if she picked him. She must be around 25 years of age, not weighing more than 110 pounds and have no more than $5,000,000 to let him "manage" for her. She must be pretty….. The reporter said "Aw" too, …Tillet, who is a courteous, mild mannered individual outside the ring, has been a professional wrestler for four years…."  A later article may speak to why he was seeking that type of girl.  Evening Independent May 10, 1947   "Unmarried he says the girls would want to marry him 'only for my money'.  With his unique look, wrestling image, and constant travel, I suspect it was pretty difficult to find that right girl.

Maurice remains relevant because he remains a model for how to overcome life's challenges.  He overcame very serious and painful outward, and inward physical and psychological conditions.  He was able to take his life, and make it into something special.  Not by avoiding his life conditions, but rather by embracing and meeting those challenges.  This is likely what Dreamworks found, and why they used a large portion of who his was in their film.

Please consider the following:
It is too easy for people to criticize Dreamworks for using Maurice.  He was a man who died from his illness.  A disease comes with both physical and emotional consequences that are extreme and challenging.  Many would find it distasteful that after their death their image might be used to create a cartoon Ogre.  Please consider that Maurice himself was special.  Maurice marketed himself as a monster.  He was a VERY public figure and everyone wanted him to come to their town or auditorium.  He was a performer and from all indications enjoyed performing to that role.  Once his audience had their fill of the Ogre, he would crack that toothy smile that lit up a room.  I can almost assure you that Maurice would have been proud to have been the inspiration for such a noble character, and positive societal influence as Shrek has become.

Maurice's story needs to be told.  His story is a amazing example of how to transcend life's most extreme conditions to become a strong, talented, balanced, and caring human being.