If your here you likely saw me on the segment on the Travel Channels, "Mysteries at the Museum", in which I was fortunate enough to take part.  The rest of this page was put together before that episode.
If your interested in knowing more & being updated on Maurice, please join me on Facebook:
https://www.facebook.com/maurice.tillet.10

Patrick Kelly, original owner of two of the four, 'Angel' death masks, claimed it was inhabited by the spirit of Maurice Tillet. 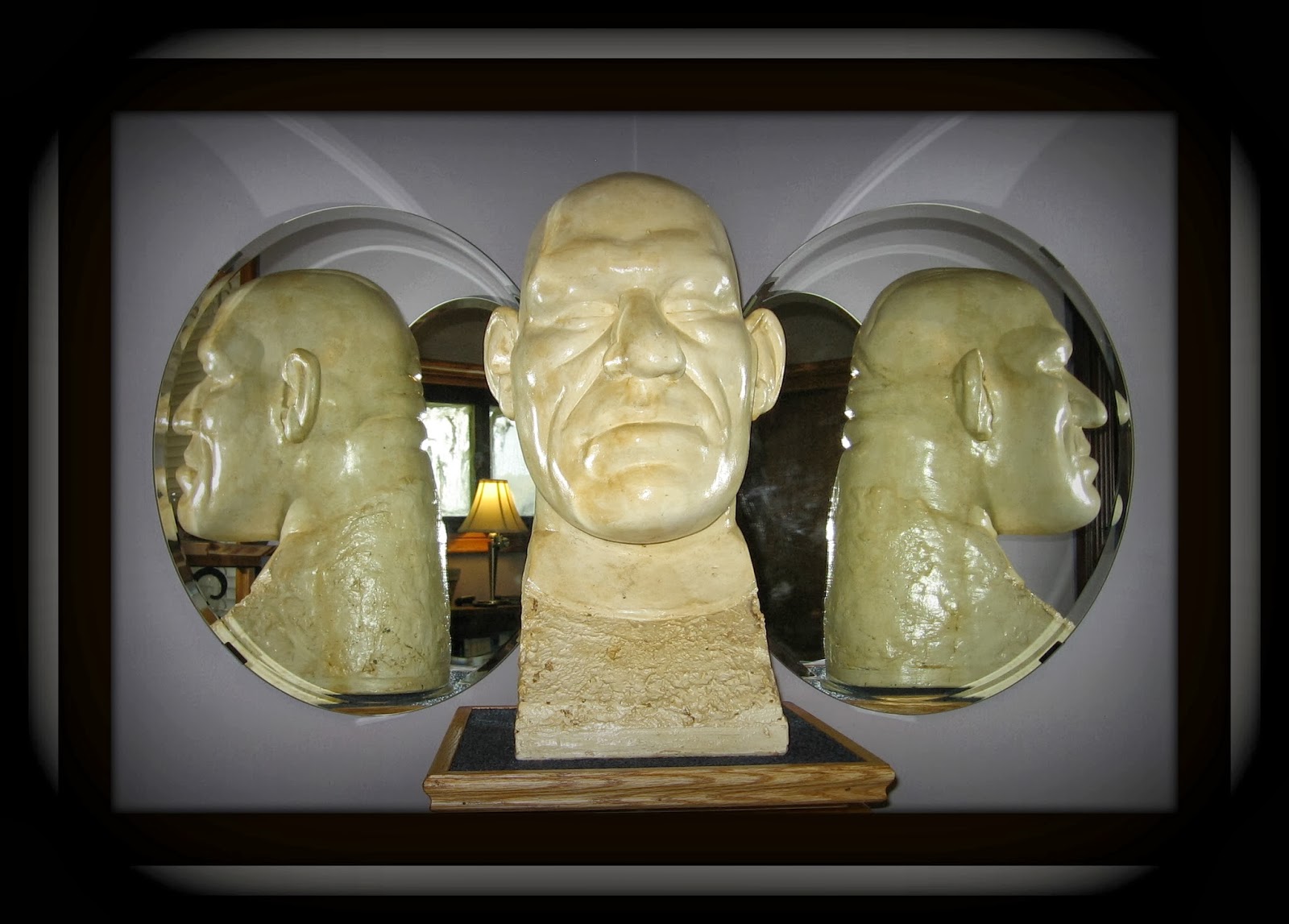 The death mask above is mine.

There is a total of four of these plaster death masks out there.  Two of them were owned by businessman Patrick Kelly aka Patrick Leonard.  Both were donated, by him, in 2006.


One went to the Harvard Anatomical Museum.
The other to The National Wrestling Hall of Fame Dan Gable Museum in Waterloo Iowa.

One of those two busts Patrick reported was occasionally inhabited by the spirit of Maurice Tillet.  Patrick claimed Maurice occasionally came back from the afterlife to play chess with him.

Patrick died on March 19th 2013.  Please pull to the bottom to read his obituary.


Below is Patrick Kelly playing chess in front of the death mask he claimed was inhabited by the spirit of his old friend, Maurice Tillet. 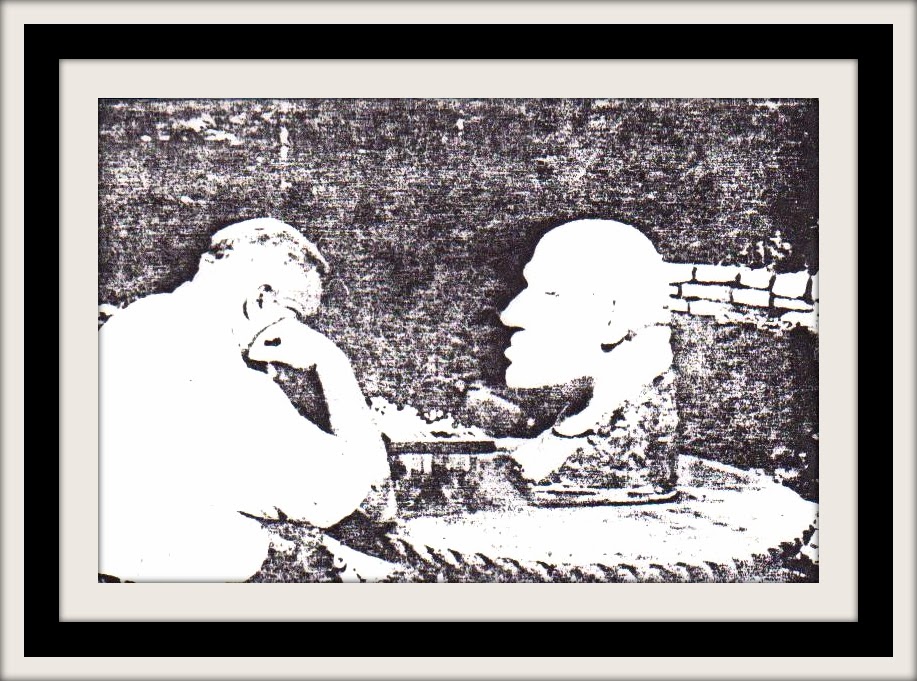 The following WIKI location talks about this - http://en.wikipedia.org/wiki/Talk%3AMaurice_Tillet.
In this location it detailed this paranormal claim came from "The World's Most Fantastic Freaks" "By Mike Parker"."

I am a skeptic.  Originally heard this story, however had no supporting evidence that the story itself came from Patrick.  I obtained the following from a wrestling historian friend.

The following newspaper is missing source.  It likely came out around Braintree, Mass..  Patrick was local to that area. 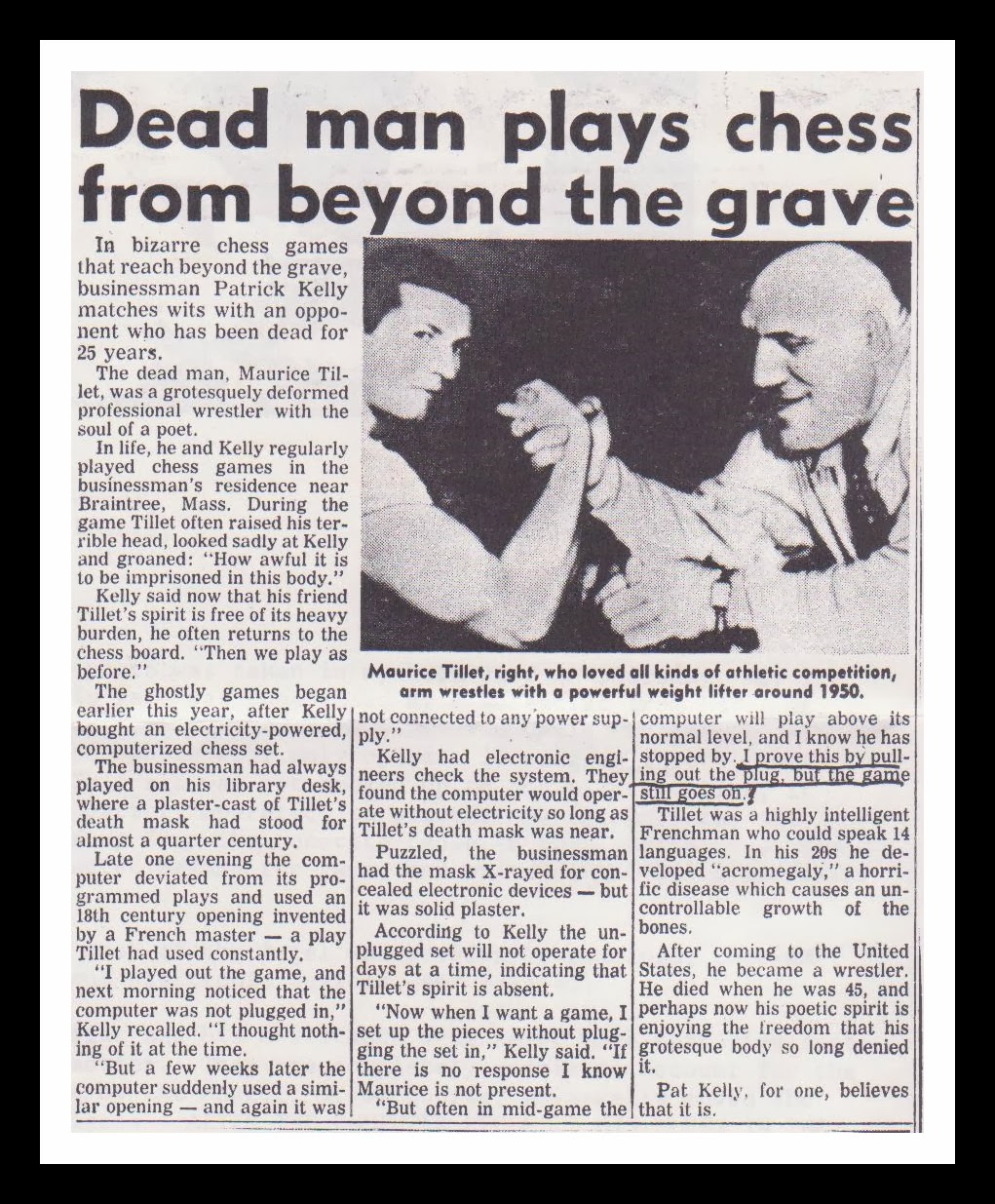 The following shows Patrick backing his claim to a friend: 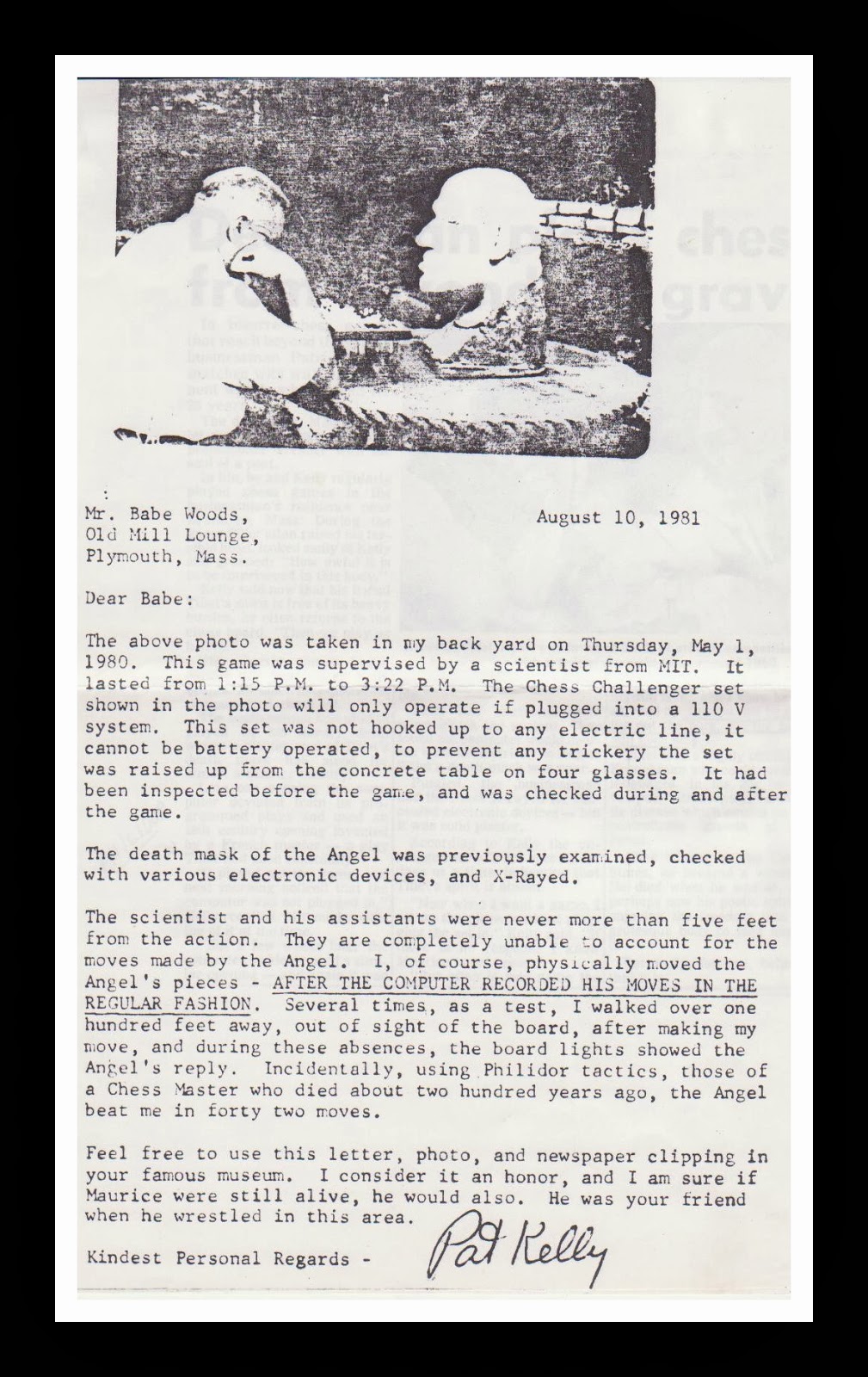 As a skeptic, I have allot of questions. Too much time has passed, and unfortunately so has Patrick.

I take this as yet another good story that adds to amazing ongoing legacy of Maurice Tillet.


Before you discount this claim, consider the following.

1.  Patrick back in 1980 say's that Maurice comes back to occasionally inhabit his death mask to play him, his old friend, in a good game of chess.
2.  I picked up my death mask right around 1995 without any idea that it depicted a real human being.
3.  Waking up to the TV show Mysteries at the Museum in 2012 I discover that my bust is of Maurice Tillet.
4.  Hunting the net, the first Death Mask I saw was the one at The Wrestling Hall of Fame Dan Gable museum, donated by Patrick.
5.  It was this contact with the museum, and obsession with these busts, that spurred my obsession to collect and share everything I could find about Maurice Tillet.

Maurice's very special life and his personality spoke to me.  The quality of this mans character was universally reported as incredible.  He was kind, intelligent, strong, and generous.  It's for these reasons I continue to be compelled to share as much about this amazing man as I can find. 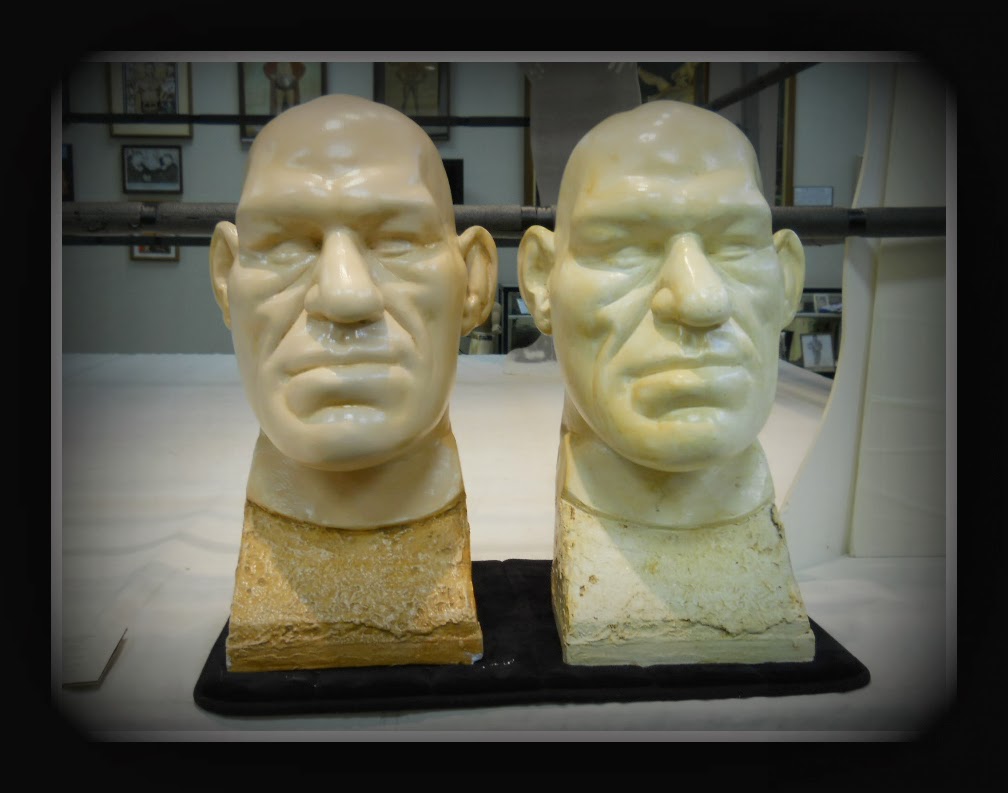 It does not escape me that my obsession with Maurice Tillet started with one death mask, mine.  It was set in motion with the death mask Patrick Kelly donated to The Wrestling Hall of Fame Dan Gable Museum.  The very death mask Patrick detailed was occasionally inhabited by the spirit of his old friend.


Are the death masks of Maurice Tillet inhabited by the spirit of Maurice?
I don't think we can answer that question definitively.
Clearly Patrick meant for us to believe it was.

If the busts are not haunted, then by their very existence they do a perfect job of inspiring thought, interest, and action.

Maurice was a showman.
You do not get to be world champion without strength, talent, and knowing how to put on a great show.
It would not surprise me at all that if he found a way back, he may check in with his likeness, and those interested enough to hold onto a piece of him.
If only long enough to say hello. 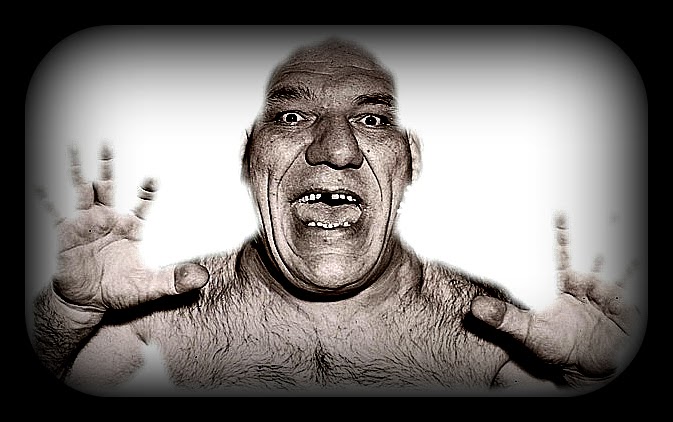 
Patrick Joseph Leonard, 95, a resident of Braintree for 70 years, passed away on March 19th, 2013, surrounded by family. He was the loving and devoted husband of the late Rosanna Meunier Leonard. He was a 1934 graduate of St. John's High School in Canton, where he grew up. Pat worked at Fore River Shipyard as a welder before and during World War II and worked on the construction of many ships including the Battleship USS Massachusetts. He married Rosanna Meunier in 1943 and moved to Braintree. Later he served on active duty in the United States Naval Reserve at the end of World War II. After the war he worked for many years for the Pinkerton's National Detective Agency and rose to be the manager of the Boston office. A private investigator for decades, he also ran his own private investigating and security officer service firm, Leonard Agency, Inc., in Braintree. A historian and noted authority on boxing, Pat had many articles published in various sports publications. Pat was an avid reader and writer and was a published author for more than forty years. His work appeared in magazines such as Yankee, Military History, Ireland's Own, and many others. His stories, both historically factual work, and creative fiction, were published both in the United States and in Europe. He belonged to both the Speckled Band of Boston, and the Sherlock Holmes Society of London; literary societies dedicated to the study of the famous fictional detective. In 1978 he won the annual literary prize of the Speckled Band; and he later was a speaker at the Sherlock Holmes Society in London. He shared his skills in writing by serving for several years as a creative writing instructor at the Universidad Americana in San Salvador, El Salvador. Pat became a member of the Boston Rotary Club in 1958, and later transferred membership to the Hingham Rotary Club, serving as its President from 1970 to 1971 when the club won the District Service Award under his leadership. He enjoyed Rotary for decades and was a 100% member; enjoying service as both program chairman and bulletin editor. He was noted for arranging for unique and interesting programs and writing weekly bulletins which were enjoyed by all. He was deeply interested in Braintree History, was a long time member of the Braintree Historical Society, was a prime mover in the design and construction of the Braintree Bi-Centennial Time Capsule Cairn, and was active on the Time Capsule project for decades. He was also a noted authority on the Sacco-Vanzetti Case and was consulted by many authors of this subject. His research into the life of Deborah Samson, a female veteran of the Continental Army during the American Revolution, and his written work about her life and military career, resulted in her being named Massachusetts State Heroine. Pat loved the ocean and for many years his family had a summer home at Sunset Point in Nantasket where he kept boats and went swimming year round. Pat was the author of scores of stories and articles and worked on his writing up until the last several months of his life. He is survived by his son, Patrick J. Leonard, Jr., and his wife Norma Bonilla Leonard of Weymouth, step-granddaughter Norma Denise McDonough Barth and her husband Brendan Barth of Yorba Linda, California, step-grandson William Charles McDonough and his wife Kerry Ayers McDonough, step-great-grandson Liam Nolan McDonough, from Whitman; and his daughter Mary Leonard Barrett, and her husband Stephen Barrett of Taunton, and grandsons Patrick Barrett of Mansfield and Christopher Barrett of Taunton. Relatives and friends are respectfully invited to visit the McMaster Funeral Home, 86 Franklin Street (Rt 37) Braintree, Friday, from 4 to 8 PM. A Funeral Mass will be held on Saturday, March 23rd at 9AM in St. Thomas More Church Braintree. Internment will be in St. Joseph's Cemetery in West Roxbury. In lieu of flowers the family sincerely requests donations in his memory may be made to a charity of one’s choice.